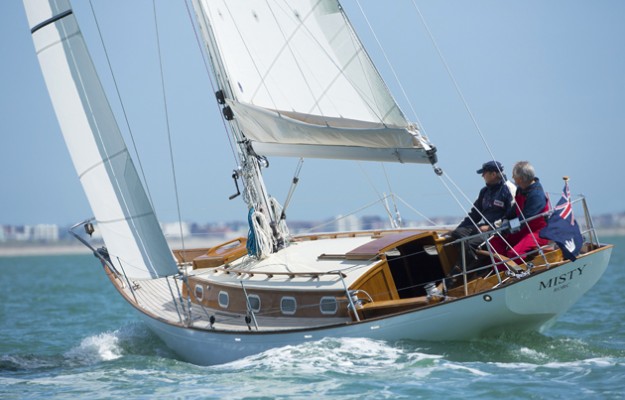 The 1958 Cheverton designed ‘Danegeld’ is well known for being one of the most successful RORC Racers ever built.  In her first full season in 1959, from 22 starts, she gained 15 first places, two seconds and four thirds, or 21 places – “an outstanding result for a racing-cruiser’s first season afloat”. This included winning Round the Island Race outright and her class in the Fastnet.  That year Danegeld was made Yacht of the Year and Bobby Lowein was made Yachtsman of the Year for Danegeld’s racing successes.

However, David Cheverton was convinced he could improve on the  ‘Danegeld’ design and in 1962 set to designing a larger version known as ‘Misty’.  With a slightly longer waterline length of 25’ and a 37’ LOA, and with an increased the displacement relative to ‘Danegeld’,  as he believed that this would be beneficial under the RORC rule. Misty was theoretically faster than the smaller ‘Danegeld’. The only ‘Misty’ was built by Claire Lallows in Cowes for  Franklin Ratsey Woodroffe of Ratsey and Lapthorn Sailmakers and, whilst sharing the good looks and fine lines of the Danegeld design, never actually realised her potential on the racecourse, spending most of her early years as a test bed and demonstrator for the sailmakers before being sold and moving across to Ireland.

Misty eventually returned to home waters in 1990 and ended up on the hard in Tayport where she languished until 2012 when she was spotted by one of the directors of SLC Associates, Stephen Card. After a lot of research into the history of the boat, which included correspondence with  David Cheverton and Ratsey & Lapthorn, it was clear that Misty would be an perfect project to see if 3d scanning and software modelling could work out if there was anything actually wrong with the design and come up with a solution.  So in August 2012, Misty was acquired by SLC Associates and delivered to the yard of A and R Way Boatbuilders at the top of Loch Fyne to begin the long process of restoration. It was clear as soon as the boat had been stripped of years of accumulated junk that this was not simply going to be a sand and varnish job.  There was considerable damage caused by water ingress through the deck at the chainplates which required a lot of hull planking to be replaced.  Unfortunately, in doing this, the original decks had to be lifted, which exposed even more damage. Alongside the restoration, work has been going on in a digital environment. The task of discovering why ‘Misty’ had never performed and what could be done to rectify it was handed over to Allen Clarke and Merf Owen of Owen Clarke Design LLP.    Although more famous for their range of Open 50’s, Open 60’s and Class 40 race boat designs than classic yachts with long keels, Allen and Merf were sure that their skills and the software systems that are available today could indeed help with optimising ‘Misty’.   So the hull was scanned using a Faro Focus 3D laser scanner and the point cloud-modeled in SolidWorks in order to create the 3 dimensional model for the simulation programs.  This also enabled the designed displacement to be checked and the total weight of the ballast keel to be accurately calculated.

Remarkably, Cheverton’s original drawings had been rescued from a skip after Cheverton ceased designing and building leisure craft, and moved into workboats.   These drawings are a piece of history in themselves and have now been given to the Cowes maritime museum. Drawn well before CAD and metric measurement became universal, they are an insight into the methods and craftsmanship needed to create a new yacht design.  They also showed that ‘Misty’ had ended up with a much smaller rig than was intended and would have been considerably underpowered.    Even replacing the rig with the correct size would bring significant benefits, but modern design techniques could do better than that.    So the baseline data became the ‘designed’ masthead configuration along with a new IRC rating, rather than the shorter masthead rig that had ended up on ‘Misty’.  The VPP software was then used to simulate different race course conditions and different rig/sail/handicap combinations until an optimum configuration was found that worked best for both the boat and the handicap rating. Even with a gain of 4 points in the IRC handicap (TCC), the simulation clearly shows that a fractional rig has significant gains over the designed masthead rig. The maximum genoa size is now 115%, much less than the large overlaps common in the 1960s. With the narrow shroud base normally found on a classic yacht, this sail has to be sheeted outside the shrouds. The overlapping genoa suitably cut should be sufficient to power the boat adequately in lighter airs. However, this arrangement would be very unsatisfactory in higher wind speeds. Consequently, a blade jib (J3) will be sheeted inside the shrouds. Of course a furler could be fitted but changing to a blade jib rather than partially furling the J1 or J2 genoa will provide much better performance upwind in breezes in access of 20 knots. Much of the efficiency of the new rig is in the aspect ratio of the main and the increased spinnaker size. Plus it should be able to point marginally higher with the slightly shorter overlap genoa. In all the simulations, the performance with the new rig looks very good and the IRC rating is very competitive, but the real test will be on the water but if the results of the simulations are anything to go on, David Cheverton may well have been justified in his belief that the Danegeld design could be improved on.